Following the Soviet Union’s first nuclear bomb detonation in 1949, the American government embarked on a domestic propaganda campaign under the banner of “civil defense” with the stated goal of preparing the American public for all-out nuclear war. Exponential increases in military spending—Robert Higgs, “U.S. Military Spending in the Cold War Era: Opportunity Costs, Foreign Crises, and Domestic Constraints,” Cato Institute Policy Analysis No. 114, November 30, 1998, https://www.cato.org/sites/cato.org/files/pubs/pdf/pa114.pdf.from $4.7 billion in 1948 to a sudden climb to $189.2 billion in 1953—and the extreme escalation of military technology was justified by a parallel systematic campaign to psychologically and emotionally condition an American public that had never witnessed modern warfare on its soil to believe that, in the event of nuclear war, survival was their responsibility. Bunker culture, duck and cover drills, detonation rehearsals, think tank reports, elementary school lessons, and big-picture films were all manifestations of state-sponsored and culturally reproduced tactics to introduce and, in turn, normalize the militarization of everyday American life during the Cold War. 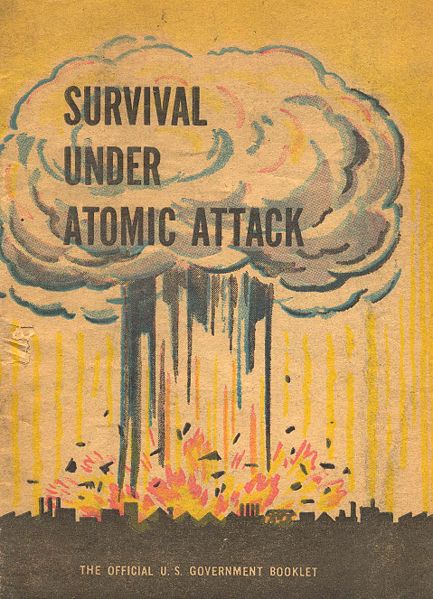 Cover of "Survival Under Atomic Attack," a handbook by the U.S. Office of Civil Defense, 1950, Wikimedia Commons

The existence of a Cold War status quo and its dependence on the doctrine of nuclear deterrence made it necessary for the American government to reconcile its efforts to make credible its willingness to deploy nuclear weapons abroad with the intertwined fear and outcry against “Mutually Assured Destruction” at home. To cope with this duality, the American government set out to “manage” public opinion. Instead of depicting nuclear war for what it was and is—the epitome of uncontrollable and irretrievable loss—the state-sponsored civil defense campaign set out to imagine nuclear war on behalf of the American people as manageable and survivable, if and only if Americans devoted themselves to extensive preparation. Guy Oakes, "The Cold War Conception of Nuclear Reality: Mobilizing the American Imagination for Nuclear War in the 1950's," International Journal of Politics, Culture, and Society 6, no. 3 (1993): 343.The analytical foundation of this imagined nuclear war was outsourced to the Cold War era think tank Associated Universities Inc. under Project East River on June 27, 1951, where—with funding from several top-tier and Ivy League universities—high-level reports, governmental action plans, preparation contingencies, and other resources were produced to inform a national preparation plan. The goal of civil defense, made clear by Project East River’s very existence, was “not to escape the world of a nuclear attack [but] on the contrary . . . to integrate this world into the mundane reality of American life.” As such, the alleged containment of Soviet expansion abroad was inextricably tied to the containment and control of domestic attitudes, opinions, and actions toward an unprecedented level of military destruction.

Pursuant the Federal Civil Defense Act of 1950, the Federal Civil Defense Administration (FCDA) from 1951 to 1958, and subsequently the Office of Civil and Defense Mobilization (OCDM) from 1958 to 1961, were tasked with the official deployment of the civil defense campaign. To make true on their promise of an imagined world of nuclear survival, they set out to recruit 15 million citizens for what they posited to be a 3-staged civil defense program.

First, for the pre-attack phase, they recruited and trained everyday citizens to take part in defense units such as rescue, police, warden, fire, communications, among others. These units, apart from directly and artificially implanting military structures and mindsets into the American lifestyle, intentionally targeted gender roles as a means of creating a gendered sense of duty in the name of national defense. Whereas men were trained with new skills, women were directed—as part of pre-attack preparations and ultimately the entire civil defense apparatus—to domestic duties, particularly the duty of ensuring an adequate food supply. With each citizen playing a cookie-cutter role, the name of the game was staying alert, always ready, always anxious, always in fear of a potential attack.

To instill this fear-based discipline, the FCDA conducted mobilization and evacuation rehearsals every year between 1953 and 1961. For example, “Operation Alert” in 1955 assumed the nuking of 60 cities nationwide and simulated the aftermath: city officials led evacuation drills; trained units practiced response routines; media pundits compared city evacuation performances; and the public internalized an estimated 33 million death toll and 63,000-square miles of fallout damages as part of the holistically imagined spectacle. Washington, DC was included in the operation: 15,000 government employees were evacuated and moved to 31 unspecified sites. Concerns about how the government would help citizens through an attack if they were also in hiding and other such matters were funneled through a centralized media campaign headquartered in Richmond, Virginia called NEWPOINT, whose main purpose was to produce stories about and broadcast the preparedness of the capital city. Other cities were chosen at random—sometimes with maps marking potential target cities simply based on their high population—to systematize psychological discipline: since we cannot predict where the USSR will attack, we must all be ready at all times.

Second, the attack phase presented a schema dominated by the absurd proposition of survival. Convincing the American public of the possibility of surviving a nuclear attack required an intensive propaganda machine. Firsthand accounts of the human suffering, long-lasting radioactive effects, and overall health consequences of the U.S. nuclear bombing of Hiroshima and Nagasaki were censored in media and government publications. Not only were the sheer destructive consequences overtly understated, but, with the ubiquitous promotion of fallout shelters and everyday preparedness, Americans were misled to believe that they might survive against all odds. Joseph Masco, "Life Underground: Building the Bunker Society," Anthropology Now 1, no. 2 (2009): 20.Bunkers were romanticized as a “new frontier experience where the resilient citizen could outwit a dangerous world with grit, skill, and moral determination.” Pictures of furnished and fully-stocked bunkers serving as another type of family room attempted to bring full circle the psychology of nuclear preparedness by introducing it to American home life. Sarah Pruitt, "How 'Duck-and-Cover' Drills Channeled America's Cold War Anxiety," History.com, March 26, 2019, https://www.history.com/news/duck-cover-drills-cold-war-arms-race.Yet, for the vast majority who couldn’t afford to excavate, build, and furnish this commodified dreamspace, the most ubiquitously recommended tactic was the “duck-and-cover.” For the entire forty years of the Cold War, especially in schools, the public was trained to believe, with “Bert the Turtle” educational cartoons and regular drills, that a nuclear attack, if it were to occur without any warning, could be survived by squatting down to the floor against the nearest wall and covering your body with your hands.

Joseph Masco, "'Survival Is Your Business': Engineering Ruins and Affect in Nuclear America," Cultural Anthropology 23, no. 2 (2008): 361-398.Perhaps the most direct attempt to condition the American mind of the viability of nuclear survival was "Operation Cue," the largest of a series of staged detonations of a nuclear attack. Performed in the Nevada Test Site and scripted by the FCDA, Operation Cue broadcasted a live nuking of a constructed test site—fully equipped with the latest consumer items from radios to cars to houses to dishware provided by 150 cosponsoring corporations and inhabited by human-like mannequins—to a 100-million national TV audience. Its female narrator appealed to the housewife narrative by explicitly calling for the feminine responsibility of securing the food supply. Pictures of the blast were taken and circulated for decades to come. Intact mannequin “survivors” were taken on a nationwide tour to serve as proof.

Just as the federal apparatus of civil defense leaned on think tanks like Associated Universities Inc. for analytical and research-based propaganda, it outsourced the reproduction and dramatization of the nuclear attack world to a nascent big-picture, big-screen cinema culture. The preparedness, survival, and rebuilding narrative, as well as images taken at simulated evacuations and nuclear detonation tests, were the subject of highly publicized motion pictures in the 1980s and 1990s. Movies such as “The Day After” in 1983 and “Armageddon/ Deep Impact” in 1998 entered American popular culture and, in effect, further institutionalized the civil defense-formed Cold War security state in the collective memory of the American public even long after the thawing of a nuclear threat.

Oakes, Guy. "The Cold War Conception of Nuclear Reality: Mobilizing the American Imagination for Nuclear War in the 1950's." International Journal of Politics, Culture, and Society 6, no. 3 (1993): 339-63.