The U.S. Department of Energy (DOE) has been responsible for securing domestic transport of nuclear materials and weapons since the establishment of its preceding agency, the Atomic Energy Commission, in 1947. To carry out this duty, the DOE uses a variety of transportation modes—commercial and governmental—to move around a range of nuclear materials and weaponry, from bomb components to complete nukes to nuclear waste shipments, through a network of military, research, storage and disposal facilities.

National Nuclear Security Administration, "Office of Secure Transportation," Energy.gov, accessed September 10, 2020, https://www.energy.gov/nnsa/office-secure-transportation.In the late 1960s, the Albuquerque Operations Office of the DOE was directed to expand operations to lead the proper transportation of nuclear weaponry. Subsequently, in 1975, an official body called the Transportation Safeguards Division (TSD) and later renamed Office of Secure Transportation (OST) was established to oversee such operations nationwide. Further organizational restructuring of the OST took place in the decades following its establishment, ultimately leading to the current jurisdictional division between three regional offices. While Albuquerque, New Mexico still remains the operational headquarters, it now also serves as the head of operations of 11 states in the Western Region. An office in Amarillo, Texas serves as the regional head of operations of 11 states in the Central Region. Lastly, an office in Fort Chaffee, Arkansas serves as the head of operations of 23 states in the Eastern Region. Along with this restructuring, all operations were transferred under the National Nuclear Security Administration’s Defense Programs division, after the agency’s establishment in 2000.

As of 2017, the OST, Adam Weistein, "Nuclear Weapons on a Highway Near You," Mother Jones, February 15, 2012, https://www.motherjones.com/politics/2012/02/nuclear-truckers/.with an annual budget of $250 million, employs 322 nuclear material couriers, known as Special Agents (SA), who are tasked with the day-to-day transportation of nuclear weaponry. Given the high-risk responsibility, these Special Agents receive training in “antiterrorism tactics” to mitigate security concerns. Further to this end, SAs transport nuclear weaponry in specially designed Safeguards Transporter (SGT) trucks that are said to be manufactured to endure the severest collisions and accidents and long-lasting fires without damage being sustained to the nuclear cargo. Though their specifications and employed technologies have developed with time, the SGT’s normal truck-like facade, with its conventional 3-axle truck tractors and 2-axle semi-trailers makeup, has remained a consistent tactic used by the OST to maintain non-detectability. 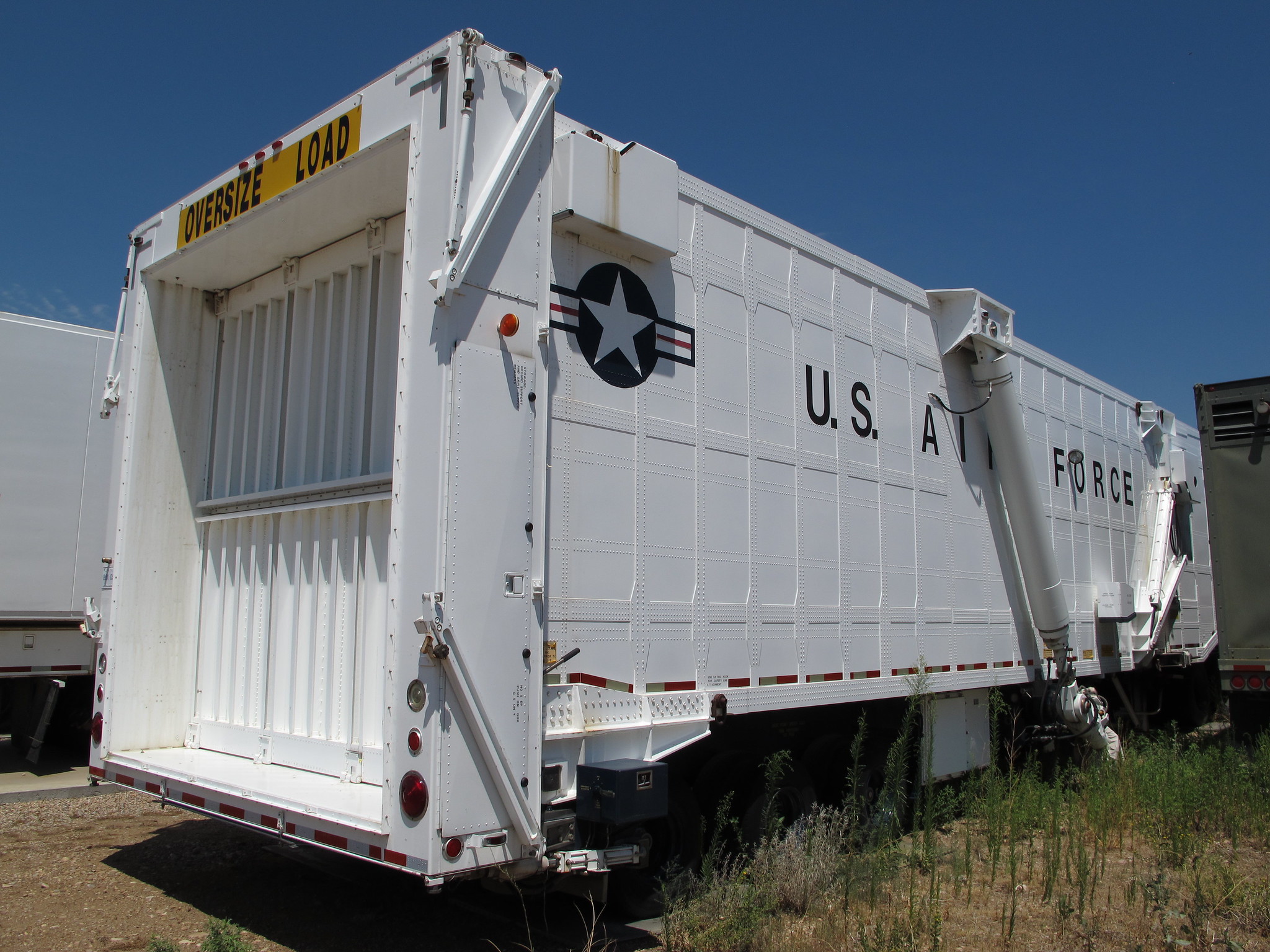 Even so, the current mode of transportation invites extensive security and environmental concerns. The use of the interstate highway system—in line with the military vision with which President Eisenhower sanctioned its construction in the 1950s—arguably places the most destructive nuclear arsenal in the world right in plain sight, moving through densely populated cities and alongside civilian commuters. The SGTs, though seemingly ordinary, are required to be escorted by unmarked OST convoys with U.S. Government license plates, which, to the trained eye, are a sure tell of their contents. Furthermore, the risk of accidents poses huge environmental threats in the form of immense radioactive pollution and contamination of surrounding wildlife and communities. Such accidents have been few and far between, at least as publicly known/reported, yet are reason enough for a critical gaze. In response to the safety and security concerns surrounding SGTs, U.S. Department of Transportation, Federal Railroad Administration, “Use of Dedicated Trains for Transportation of High-Level Radioactive Waste and Spent Nuclear Fuel,” March 3, 2005, https://railroads.dot.gov/elibrary/use-dedicated-trains-transportation-high-level-radioactive-waste-and-spent-nuclear-fuel.transport of nuclear material by railway has been the subject of numerous ongoing governmental considerations and Associated Press, “Feds Want Nuclear Waste Train, but Nowhere to Go,” USA Today, August 31, 2014, https://www.usatoday.com/story/money/business/2014/08/31/feds-want-nuclear-waste-train-but-nowhere-to-go/14904167/.has accounted for 2,300 tons of spent fuel transport from 1979 to 2007.

In 140 million miles covered by SAs to date, there have been at least 3 reported accidents. James Brooke, "Road Mishap Puts Focus on Shipment of A-bombs," The New York Times, December 19, 1996, https://www.nytimes.com/1996/12/19/us/road-mishap-puts-a-focus-on-shipments-of-a-bombs.html.In 1996, a nuclear bomb-holding SGT flipped on its side and spilled radioactive material along the hillside on Nebraska’s Highway 83 road. Cecil Bothwell, "Cake out in the Rain," Mountain Xpress, July 7, 2004, https://mountainx.com/news/community-news/0707uranium-php/.In 2003, two privately operated SGTs carrying uranium hexafluoride had accidents in Montana and Tennessee. And, in June 2004, an SA was pulled over on Interstate 26 on its way from the Nuclear Fuel Services manufacturing plant in Tennessee for leaking allegedly small amounts of uranyl nitrate. Briana Nofil, "The Secret 'White Trains' That Carried Nuclear Weapons Around the U.S.," History, May 6, 2021 [last updated], https://www.history.com/news/nuclear-transportation-u-s-white-trains-cold-war.
Acknowledging these miscalculations, along with a myriad of other alcohol and crime-related SA activity, activists have taken increasingly scrutinous action toward the approval, safety, and accountability of the OSTs work in recent decades. 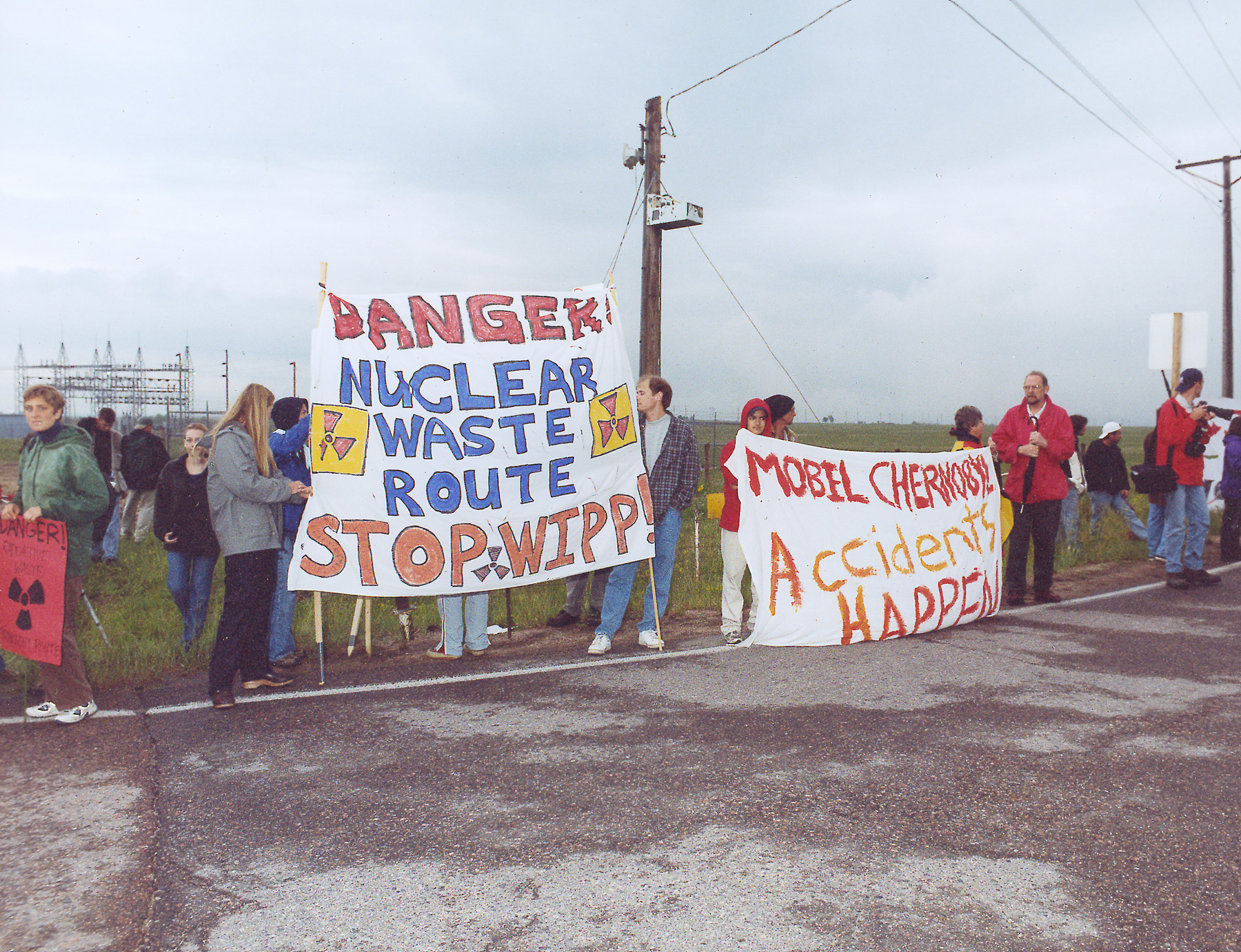 Protest against the transport of radioactive waste by truck from Rocky Flats to the Waste Isolation Pilot Plant., ca. 1990, Department of Energy

Similarly, nuclear waste shipments present a host of safety and environmental issues, not least of which is the lack of a long-term storage solution and concerns over the security of waste transport. On the nuclear energy side, Nuclear Information and Resource Service, "Stop Nuclear Transport," https://www.nirs.org/campaigns/dont-waste-america/stop-nuclear-waste-transport/.the Nuclear Information and Resource Service, for example, advocates for hardened on-site waste storage at reactor sites, rejecting proposed plans for so-called centralized “interim” storage facilities (CISFs). Beyond Nuclear, "Mobile Chernobyl Routes Across the Lower 48, Bound for Proposed Southwest Dump-sites,” http://www.beyondnuclear.org/waste-transportation/2021/12/31/mobile-chernobyl-routes-across-the-lower-48-bound-for-propos.html.In 2017, a number of CISFs were slated for New Mexico, Nevada, and Texas. Nuclear companies and the Nuclear Regulatory Commission claim such facilities will safely congregate spent fuel until transport to a permanent location; they aver that transport trucks and railcar shipments safeguard against radiation and that thousands of shipments of high-level waste have already been made throughout the U.S. without any radiological releases to the environment or harm to the public. Nuclear Information and Resource Service, "Stop Nuclear Transport," https://www.nirs.org/campaigns/dont-waste-america/stop-nuclear-waste-transport/.Activists argue that transporting over 70,000 tons of nuclear waste from reactor sites to CISFs would make for a “mobile Chernobyl,” potentially exposing millions of Americans to harmful radiation and creating higher risks of nuclear accidents.

The controversy over commercial nuclear reactor wastes makes a case for heightened consideration of the threat that high-level radioactive waste transport poses as part of the U.S. nuclear weapons complex and its everyday interfacing with public infrastructures and populations. The closure and remediation of production facilities, such as the Rocky Flats plant, entailed the removal and geographical redistribution of nuclear materials and wastes by truck and rail to other sites for disposal or reuse, with recovered plutonium sent to Los Alamos, Nevada, for example, and tens of thousands of drums of transuranic and hazardous wastes shipped to the DOE’s Radioactive Waste Management Complex in Idaho Falls, Idaho, and then on to the Waste Isolation Pilot Plant (WIPP) in Carlsbad, New Mexico—the only operating long-term waste storage site in the country. Plans to collect high-level radioactive waste and spent nuclear fuel from across the country for permanent disposal at the Yucca Mountain deep geological repository were dashed by the vehement opposition of politicians and residents in the state of Nevada, the Western Shoshone, and broader public, leading to the suspension of the project. Even as this controversial project and its suspension raised public awareness of the insoluble problem of nuclear waste, WIPP has been plagued with safety issues and a backlog of waste shipments, revealing that high-level radioactive waste levels far exceed existing geological repository capacity. Equally untenable is the de facto solution of leaving hazardous wastes on site at nuclear facilities around the country, in interim, “make-do,” and rapidly decaying Manhattan Project-era infrastructure.