Cold War Horse is a memorial created to acknowledge the history of Rocky Flats, its workers, and the surrounding community. 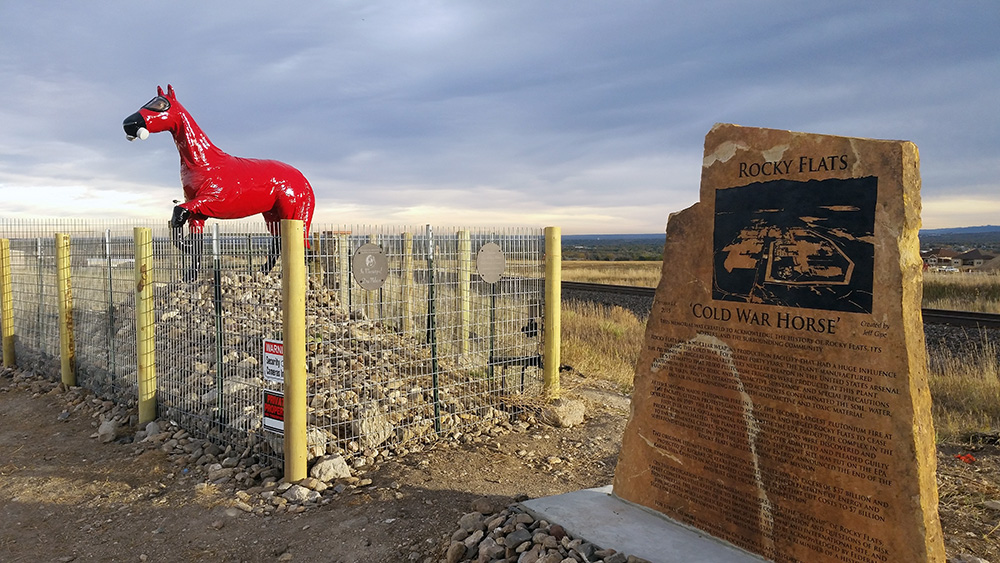 For nearly forty years, the Rocky Flats plant manufactured the plutonium triggers of nearly every nuclear weapon in the United States arsenal. It’s estimated that 70,000 plutonium triggers were produced at this plant. Plutonium is a highly toxic and radioactive substance, and special precautions had to be taken.

Operations and accidents contaminated the soil, water, and air in surrounding areas with radioactive and toxic material. After a second major plutonium fire in 1969, the second largest plutonium fire at the facility, citizen protests gained momentum and urged Rocky Flats to cease operations. In 1989, the FBI in conjunction with the EPA raided the complex in the first ever inter-governmental raid. Many violations were discovered and production was halted. The plant’s operators later admitted and pleaded guilty to environmental crimes. Soon after the raid, the plant site was put on the EPA Superfund cleanup list. In 1993, the Secretary of Energy announced the end of the Rocky Flats nuclear production mission.

The original estimate for remediation of the site was in excess of $37 billion and projected to require 70 years for completion. The Department of Energy and Kaiser-Hill devised an accelerated compromise plan that cut costs to $7 billion and just one decade for completion.

On the dedication of this memorial, 10 years after the “cleanup” of Rocky Flats, safety concerns still exist due to remaining contamination and questions of risk. Nonetheless, the history of this important national and international site, and the workers who sacrificed so much, have yet to be acknowledged by federal, state, or local governments. This memorial stands as a reminder of a history that we must not forget.