I am concerned with the truth and the myth, with secrets and public knowledge, with successes and failures, with achievements and disasters, with honesty and fantasy, with realities and fabrications, and with denial and confirmation.
– Gregg Schlanger

Mapping Plutonium (Hanford to Rocky Flats) focuses on issues relating to the United States development of nuclear weapons. It is about the secrecy; the environmental disasters; the toll of human health; the deceptions of the corporations and government; the nuclear waste; the denial; and the rapid expansion of new housing development around the Rocky Flats site. The exhibition contains art and artifacts. It is part fact and fiction.

Mapping Plutonium is an ongoing installation art project. It has taken various forms with each install, responding to the location. The images included represent installations at the Rocky Mountain College of Art & Design, the Boulder Public Library, the Denver Public Library, and Gallery One Visual Arts Center in Ellensburg, Washington. 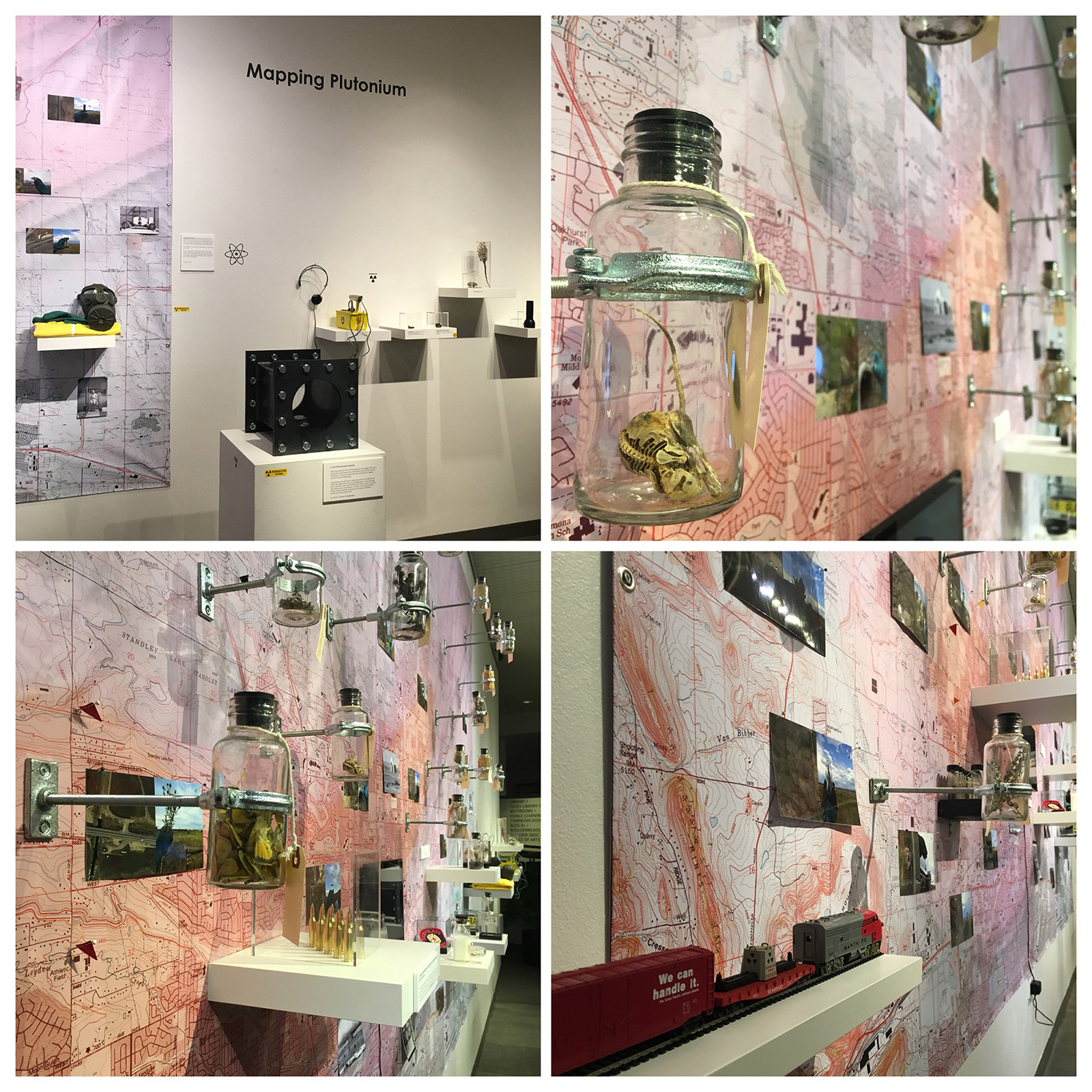 A large map of the Denver area is made from many historical topographical maps seamed together. This map is the residue of my mapping actions. I traveled around Rocky Flats and used Google maps on my cell phone to locate exactly where I was. I also did the same around the Hanford Site, 60 miles from my house. I would take a screen shot of the location. At each location, I would pick up an object. It might be a sample of soil, water, plants, trash, etc… when possible I would put this in a bottle, hold it up wearing a green chemical glove, and document this action. These images are combined in a diptych photograph. The bottles containing the artifacts or findings are mounted on the map in relation to the location it was found, and map pins are used to add more of these “mapping” locations. Each item is tagged with identification, location, and radiation level. (The radiation level is speculated). There are several other “found” objects placed on the map.

The video piece is titled “Chinook Winds.” The video is two clips overlaid: one is of a tractor plowing a field with a large amount of dust blowing, and the other is an American flag. The video was projected in a room with an installation that had an American flag on display about a pool of water representing the contaminated groundwater. The label indicated this was the Disclaimer: this is not the actual flag but what the artist imagines it would look like today.last flag to fly at Rocky Flats. The last flag to fly at the Rocky Flats plant was taken down June 6, 1989 during the FBI raid that shut down the facility.

There is also an interactive area with a working Geiger counter from a 1960s Civil Defense home shelter kit. One is able to use the wand and hear the sounds of the counter. There are three rocks containing uranium ore, all with low levels of radiation. One is pitchblende in metamorphic rock from Ralston Creek, Jefferson County, Colorado, just down the road from one of the galleries showing this work. There were several uranium mines along the foothills surrounding Rocky Flats.

There is a small artifact, a Raschig Ring made of borosilicate glass. The rings are used to prevent an accidental criticality by absorbing neutrons—used in overflow tanks at Rocky Flats that might contain enough Pu-239, U-235, or U-233 to go critical. (This is the real thing).

There is a small piece with ten .243 bullets under a Plexiglass box on a shelf. This piece is entitled “Actinide Concentrations in Tissues from Cattle Grazing Near the Rocky Flats Plant.” It is for the ten cows that were shot with a .243 caliber bullet on November 13, 1973 for this study. 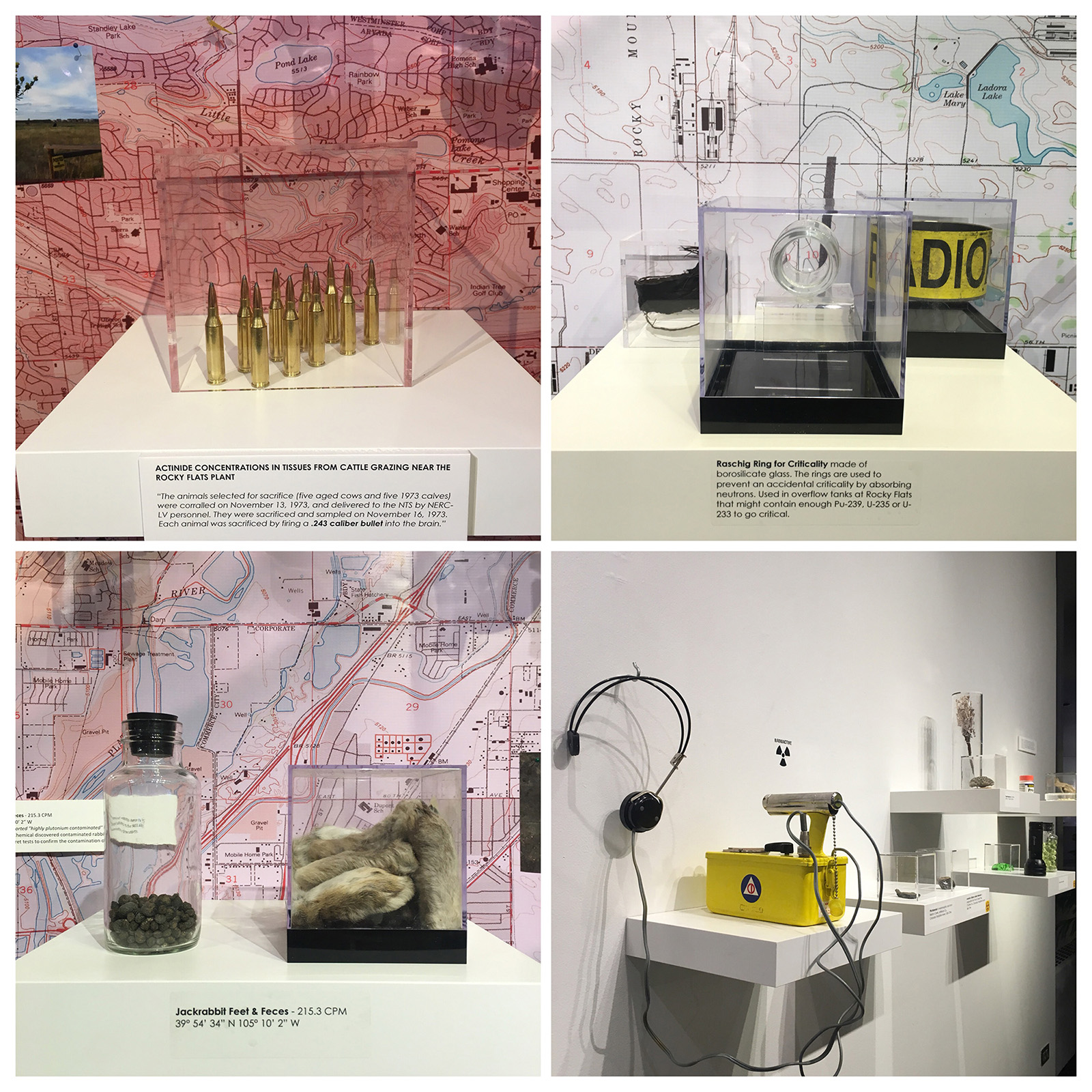 Rocky Flats manufactured most all of the plutonium pits (triggers) used in nuclear weapons produced by the United States. Specific information on weapons containing Rocky Flats plutonium triggers continues to be classified today.

The plutonium was extracted in a liquid form from the irradiated fuel rods at the Hanford Site in the state of Washington. It was processed into a solid form. Crews took the plutonium nitrate solution and made solid, hockey-puck sized plutonium “buttons” and plutonium oxide powder which could then be shipped to the country’s weapons production facility at Rocky Flats.

The back half of the east gallery is the “903 AREA” and contains two pieces. The first piece, “903 AREA,” is a rusty barrel that has an atomic logo image. The barrel is buried in several obvious layers of soil. This represents the attempted burial and artificial cleanup of this site. The 903 Area or Pad 903 had thousands of 55 gallon drums of waste stored outdoors and unprotected. The corroded barrels leaked radionuclides into the soil and water for many years.

The second piece is an installation with rabbits, water, dirt, and rusty barrels, with the title "How to Explain Radiation Sickness to a Contaminated Rabbit [stool for Joseph Beuys]." In 1969 Dow Chemical discovered contaminated rabbits in the 903 Area and conducted secret tests to confirm the contamination of the rabbits. In 2002, the U.S. Fish and Wildlife Service conducted a study at Rocky Flats to determine activity levels of radionuclides in deer tissues. Twenty-six Rocky Flats deer were culled for the study and seventeen tissue samples resulted in detections of low levels of radionuclides. Among the Rocky Flats deer, americium was detected in lung, muscle, and kidney tissues, plutonium was found in bone samples, and uranium was discovered in liver and muscle tissues.